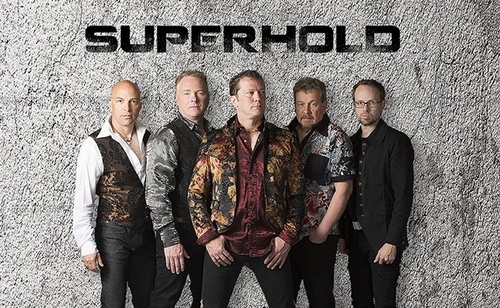 SuperHold is a Roanoke, VA-based 80’s TRIBUTE band. Bringing back some of the most iconic hits from the MTV era, when kids, like us, would sit for hours and watch music videos. It was time when the latest release from your favorite artist was an event. Not just MP3 background noise as you added to your computer’s 500,000 song collection. The kids dressed like and imitated their rad fav’s from Bon Jovi to U2 to Pat Benatar and Van Halen. Air guitar, video arcades, and parachute pants were all the rage and you couldn’t turn on a radio station that wasn’t playing Rock & Roll!! Well these five guys never grew out of that phase!! You can expect a wide variety of 80’s rock and pop from a group of guys that still have a love for that era of music, and they let that shine on stage. We hope to see you at one or all of our shows this year! Until then, Rock On, Beavis!

More Info about the Band:
http://superholdband.comhttps://www.facebook.com/superhold/http://youtu.be/KZABaX8w-Bg
VIEW ALL EVENTS

Franklin Road between
Williamson and Jefferson